The life of celebrated American writer Harry Street (Gregory Peck) flashes back before his eyes as he lies dying from a wound suffered at the foot of Tanzania’s Mount Kilimanjaro. As he is tended to by his traveling companion, Helen (Susan Hayward), he recalls many things: his first wife and Paris literary inspiration, Cynthia Green (Ava Gardner) ; his second wife, Countess Liz (Hildegarde Neff) ; and his formative years with uncle Bill (Leo G. Carroll).

The opening title cards of this film read: “Twentieth Century-Fox presents Gregory Peck, Susan Hayward, Ava Gardner in Ernest Hemingway’s The Snows of Kilimanjaro.” At the beginning of the film, a voice-over narrator quotes the opening of Hemingway’s short story: “Kilimanjaro is a snow-covered mountain 19,710 feet high, and is said to be the highest mountain in Africa. Its western summit is called the Masai ‘Ngje Ngi,’ the House of God. Close to the western summit there is the dried and frozen carcass of a leopard. No one has explained what the leopard was seeking at that altitude.” 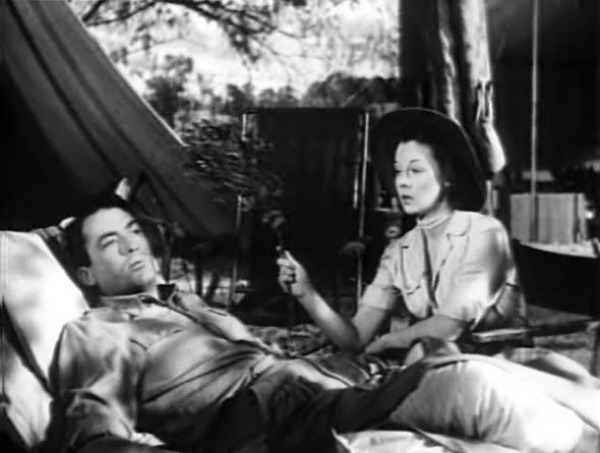 As noted by many reviewers, the character of “Harry Street” dies at the end of Hemingway’s original story. According to information in the Twentieth Century-Fox Records of the Legal Department, located at the UCLA Arts-Special Collections Library, Hemingway first sold the rights to his short story to independent producer Mark Hellinger in 1947. Hellinger later restored the rights to Hemingway, and Twentieth Century-Fox bought the story for $125,000 in June 1948.

Humphrey Bogart, Richard Conte and Marlon Brando were mentioned by Hollywood Reporter news items as being under consideration for the role of Harry. Information in the Twentieth Century-Fox Produced Scripts Collection, also located at UCLA, adds that in July-August 1951, producer Darryl F. Zanuck was considering casting Dale Robertson as Harry. In July 1948, Los Angeles Times reported that Gene Tierney had been cast in the film. According to studio records, Anne Francis was originally cast as “Cynthia” but was replaced by Ava Gardner. According to modern sources, Hemingway himself suggested Gardner, while a 1991 Hollywood Reporter news item stated that Hedy Lamarr was also under consideration for the role. Gardner was borrowed from M-G-M for the production. Although studio records list both James Davis and Everett Brown as “Abdulla,” studio publicty indicates that Davis played the role in the finished film. Hollywood Reporter news items include the following actors in the cast, although their appearance in the released film has not been confirmed: Thomas Licht, Edward Gimpell, Gay Gayle, Louis Tomei and The Hallelujah Singers.

As noted in contemporary sources, backgrounds for the film were shot in Paris, the French Riviera, Spain, Kenya, Tanzania and Nairobi. Studio records report that the bullfight sequences were taken from the 1941 Fox production Blood and Sand (see AFI Catalog of Feature Films, 1941-50). Studio records add that the version of the film released in Germany and Austria contained a sequence of Hildegarde Neff as “Countess Liz” singing “You Do Something to Me.” In connection with publicity for the film’s opening in Los Angeles, Gardner imprinted her hand-and footprints in cement in the forecourt of Grauman’s Chinese Theatre on 21 October 1952. 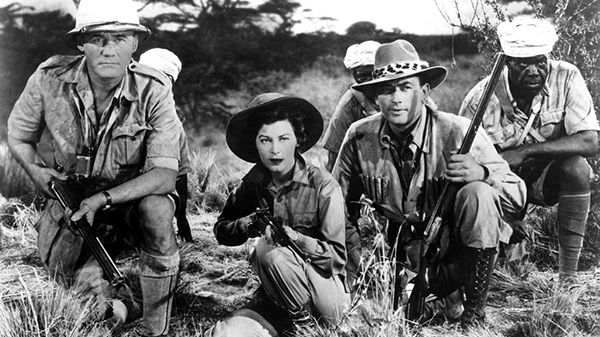 According to the film’s file in the MPAA/PCA Collection at the AMPAS Library, the PCA rejected the May 26, 1951 draft of the screenplay. In a June 1951 letter, PCA head Joseph I. Breen strongly objected to the portrayal of Harry as a thrice-divorced man [in early drafts, Harry married “Connie,” “Cynthia,” “Liz” and “Helen”], Cynthia’s self-induced miscarriage and the suggestion that Liz was a lesbian who had an affair with her model “Beatrice.” Harry’s multiple marriages and Liz’s lesbianism were dropped from subsequent drafts of the screenplay, although the PCA continued to demand that Cynthia lose her baby accidentally, rather than by throwing herself down the stairs. On August 1951, Breen again wrote to the studio, approving the self-induced miscarriage by noting that the script had been in development since 1948, before the March 1951 adoption of the PCA’s rules prohibiting any depiction of abortion.

The film received Academy Award nominations for Best Cinematography (Color) and Best Art Direction (Color). Although the picture received mixed reviews, it was the third-highest grossing film of 1952, with a domestic box-office total of $6,600,000, according to a modern source. In May 1956, New York Times reported that the picture had been banned in India for “presenting ‘disparaging’ impressions of life in Africa.” King, screenwriter Casey Robinson and Gregory Peck had previously worked together on another Hemingway adaptation, the 1947 UA release The Macomber Affair (see AFI Catalog of Feature Films, 1941-50). In 1957, King again directed Gardner in the Hemingway-based Twentieth Century-Fox release The Sun Also Rises (see below).

© 2021 The Snows of Kilimanjaro. All rights reserved.